The Yard – Berlin in the heart of Gothenburg

Tough industrial environments seem to act as a spur to creativity and imagination, so it’s not surprising that they’re in demand. Like the old ship-yard area of Gothenburg, now known as The Yard, which it is hoped will attract tech entrepreneurs who want high ceilings, but low thresholds.

In the heyday of the shipyards nick-names abounded. If you asked for the Little Baker, the Shovel Killer, Rock Olga, Lamb Chop or Piggy, everyone knew immediately who you meant.

The Yard, as it is now, will be the area where tech startups in Gothenburg will establish themselves. It will simply be their own part of town. Ceilings are high – up to 10 metres in the 880 square metre Pannverkstaden (the Boiler Workshop) – but for startups the threshold is low. And it will soon be only a four-minute ferry ride or five minutes on an electric scooter from here to the city center.

It looks like the poor relation of the biggest and glossiest mobility and film companies, the visualisation cluster and Karlatornet, with the Lindholmen skyscraper growing by a floor a day. At the same time, it’s located only a stone’s throw from the Gothenburg Opera, the Platinan building, the new Hisingen bridge and the Central station. But happily it’s going to keep its rather down-at-heel vibe, like a little Berlin on the north bank of the river, almost opposite the center of Gothenburg, but still untouched.

“The plans for the shipyard area were drawn up in the 1940’s and have thirty more years to run. According to them the area should continue to be used for industrial purposes,” says Melina Garhed, who is responsible for marketing at Älvstranden Utveckling, which owns and administers the properties.

For those who haven’t been to Gothenburg for a while, they’re in for a shock when they see all the new skyscrapers changing the skyline. In Gårda the biggest office building in the Nordic countries, Citygate, is growing. Eriksberg has Kronjuvel and Järntorget has Våghuset, and so it goes on. A new city is emerging and negative remarks about the look of the growing buildings and the deep holes in the ground are changing to admiring comments. The goal is to spend 1,000 billion SEK on buildings by 2035, and we’re already starting to see the results. 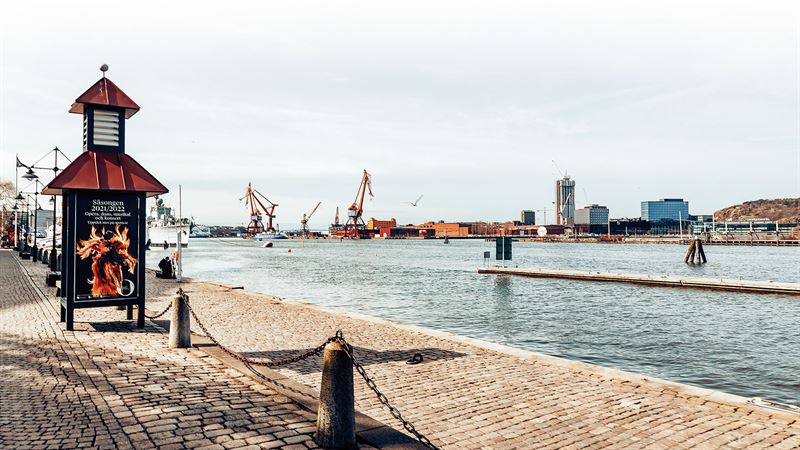 The major companies which play such a large part in Gothenburg have concentrated their presence closer to the city center, particularly at Lindholmen. The area boasts the Science Park, the Volvo Corporation, Ericsson, and Geely’s gigantic Uni3, a campus of 105,000 square meters, which houses several Geely firms.

Andreas Göthberg of Business Region Göteborg, Head of Business Development, has been involved in many discussions with tech companies and investors about the need to find a place for them to gather, and to grow. Properties at Lindholm have lower than one per cent vacancy levels, which puts them out of the running. But there are advantages to be near the expertise found in the large mobility and creative companies.

“We needed to create a shop window for tech companies so risk capitalists could find them. The shipyard area quickly became the obvious place with its existing, unused buildings which could house both workshops, and projects at different phases of development,” says Andreas. “There’s bound to be a lot of focus on mobility, but the space will also house maritime and shipping interests.”

The name, The Yard, was an obvious choice he says. ”It’s easy to see it in your mind’s eye – like a Hollywood sign.”

“The area is a fantastic mixture of beautiful industrial brick buildings and dreadful metal sheds – an  environment which in many ways played into our hands. When we were developing the area we wanted its history to be clearly visible,” says Melina Garhed.

4 minutes from city center
From Gothenburg Opera you can look out over The Yard, which is a stone’s throw from the city center. A new ferry line is due to be opened, as well as a new tram route in 2025 and a bridge for pedestrians and cyclists in 2028.

The Yard offers space for workshops, meeting places and scalable offices for tech companies which need room to grow and are interested in the nearby competence cluster at Lindholmen with its Science Park and the development facilities of global companies.

The text was originally published in Gothenburg Magazine 2022

Get to know more about Gothenburg’s key sector Automotive & Mobility

Meet us at Slush